The development of BIPV prototypes based on the crystalline silicon (c-Si) technology is now finalised. These prototypes of c-Si glazed products, developed by Onyx Solar, are a solid basis for the modules that will be used in real implementations as ventilated façades in next project stages.

One of the main BIPV market acceptability constrains is that most crystalline photovoltaic solutions show visible cell busbars and string L-interconnections with a metallic aspect. Onyx Solar has followed different strategies for the development of two generations of opaque c-Si glass-glass modules with hidden bus bars and L interconnections (PVSITES product X5). Two product generations have been developed: 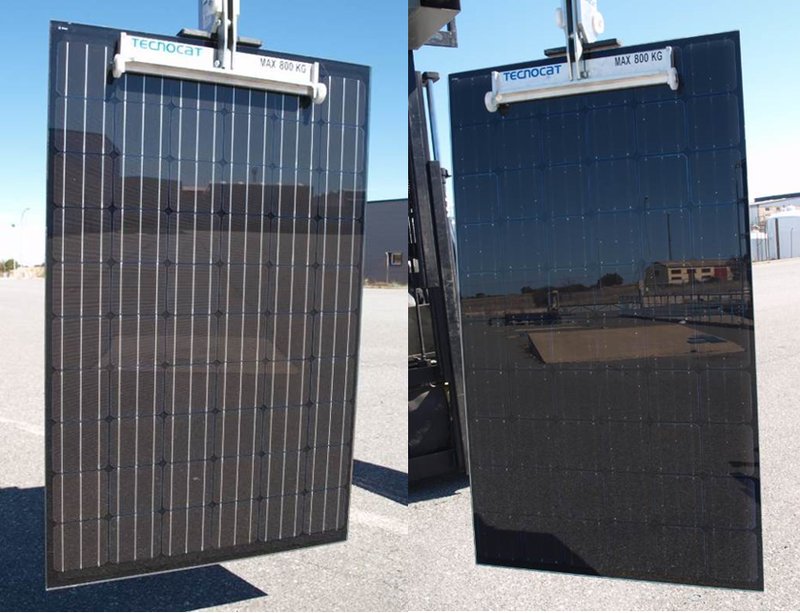 For specific building solutions such as skylights and curtain walls, the decision maker is looking for certain light transmission values. For these cases, a compromise between cell density providing the see-thru degree, efficiency and aesthetical added value should be found. Attending to these needs, Onyx Solar has implemented back-contact solar cells within the photovoltaic glazing design. Some of the manufactured glass-glass modules with back-contact c-Si cells are shown below: 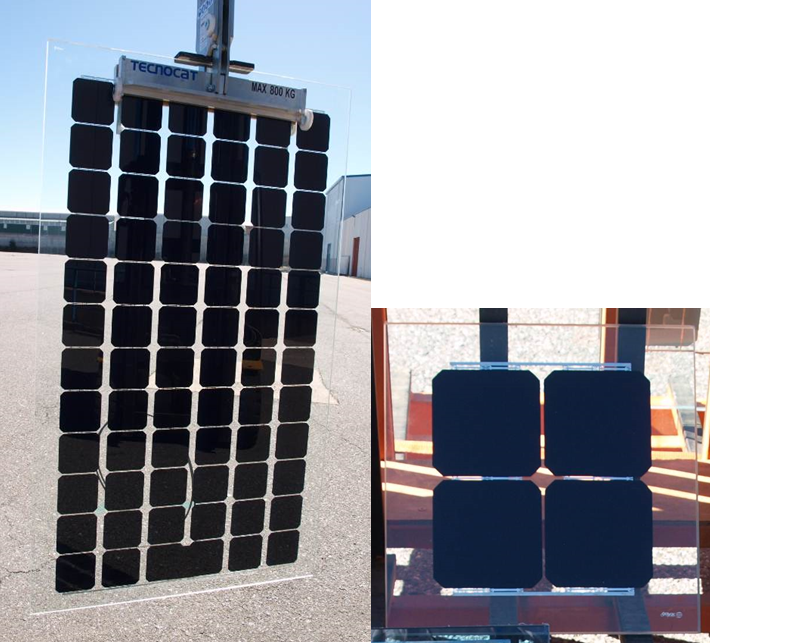 Onyx Solar has also worked on the analysis of potential glazing treatments compatible with BIPV technology (PVSITES product X12), such as self-cleaning, mass coloured glass, frit patterned glass, reflective coatings and low-emissivity (low-E) coatings, in order to understand their effects on the BIPV glazing and the improvement generated on the passive properties of c-Si  BIPV units. After this analysis, Onyx Solar has manufactured a set of prototypes with different treatments such as blue mass coloured glass, coloured reflective treatments and low-E (product X12). Some pictures are shown below: 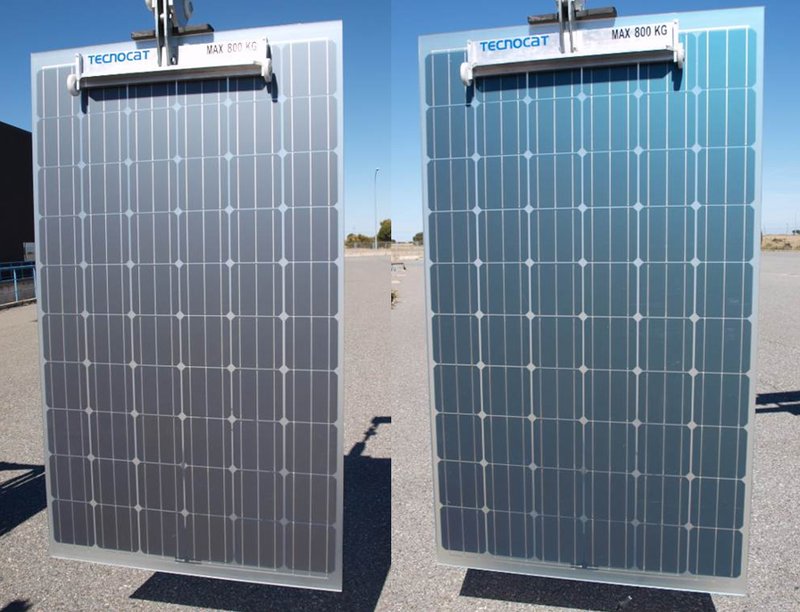 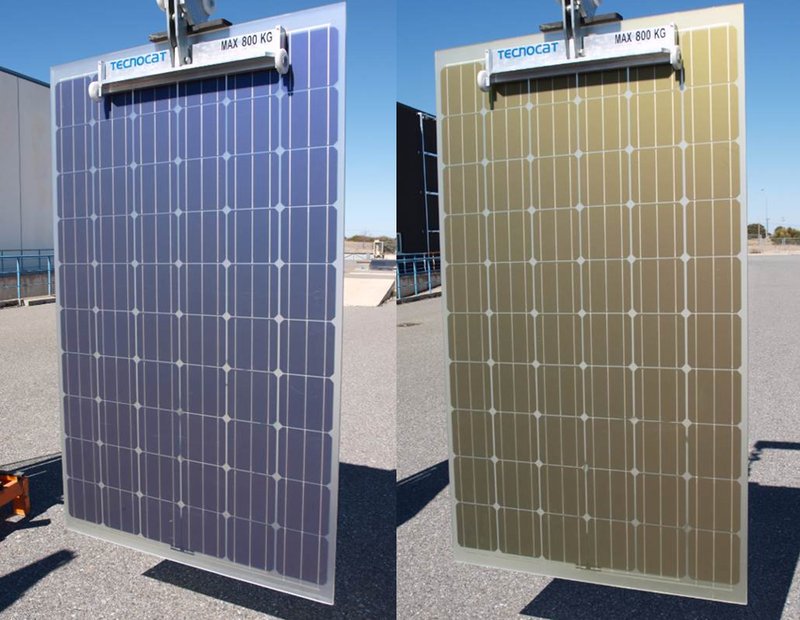 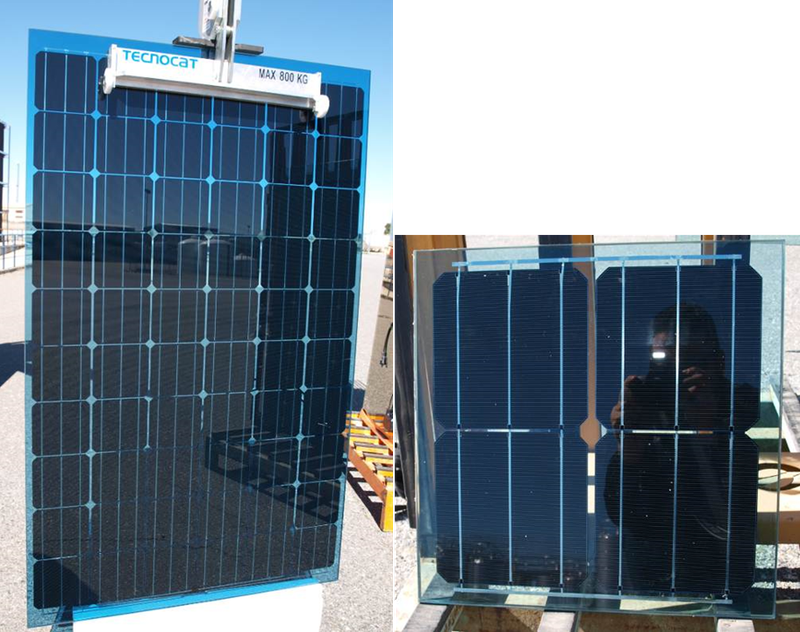 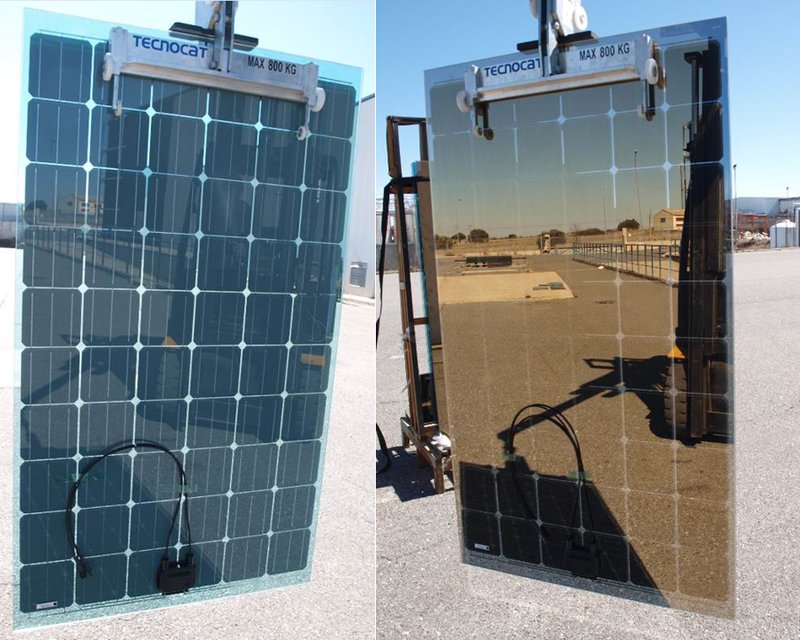 As a parallel development, Onyx Solar has worked on the analysis of framing systems compatible with XL-formats and large thickness BIPV units (PVSITES product X8) with the aim of completing its current activities on XL-BIPV units. The analysis investigated existing possibilities in terms of full BIPV system integration and led to the prototyping of framing solutions compatible with XL-formats and different building solutions (curtain walls, vertical façades and skylights) where the mechanical aspects and hidden wiring strategies have been elucidated. 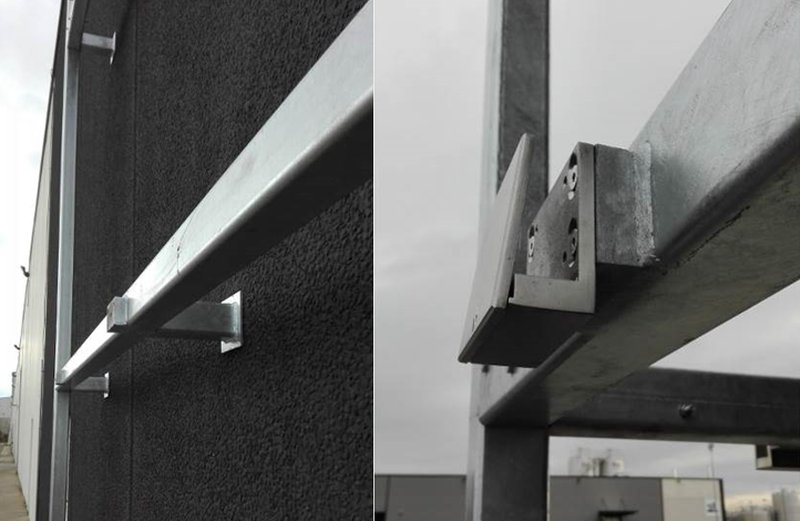 PVSITES partners Onyx Solar, TECNALIA, CEA and CTCV have defined the testing needs to guarantee the compliance of all the products described with the most relevant standards related to the integration of photovoltaic materials in buildings. They have also defined the dimensions, characteristics, technical data sheets and drawings of the samples before starting the manufacturing process taking into account the standardization needs. Different prototypes of the described c-Si based products have been manufactured according to the necessary configuration for testing.

More information about the prototypes developed by Onyx Solar is available in the following public reports:

As detailed in the last of these reports, the prototypes will now be subjected to standardized tests including thermal cycling, irradiance, impact resistance, wind resistance, fire resistance etc, which were themselves defined in this document.

The other BIPV prototypes under final development by the PVSITES consortium will also be introduced in the months to come. These include the thin-film CIGS modules prepared by Flisom (X1 to X4) and the low-concentration c-Si systems developed under the coordination of Tecnalia (X9 to X11), as shown in the table below. 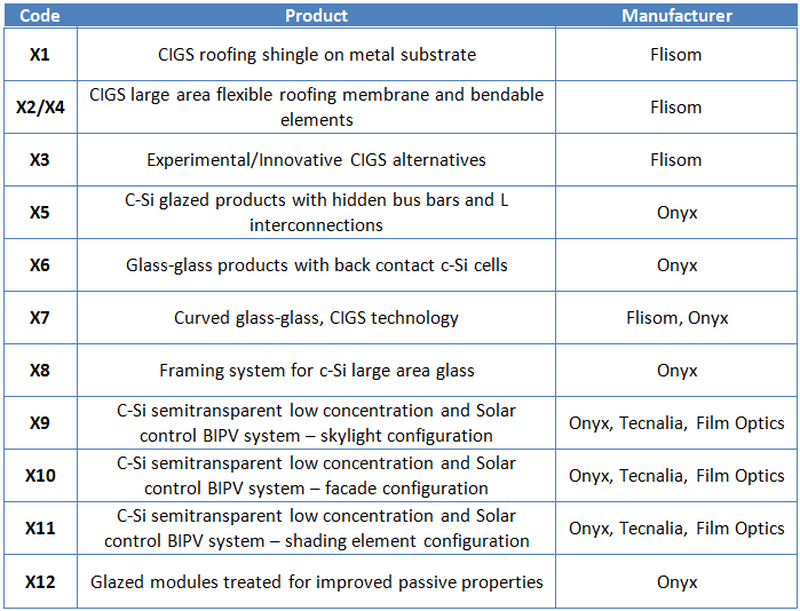