A varied range of innovative BIPV products have been installed on six real demosntrators in five different European locations and climate conditions. Technology Readiness Level 7 (TRL7) has been demonstrated, meaning that the BIPV products developed should perform appropriately in their intended operational environments.

An overview of the demonstration sites and the products which have been installed is provided in the following tables. More details for each demonstration site are available below, along with a description of experimental sites where further testing of BIPV products is taking place for the PVSITES project. 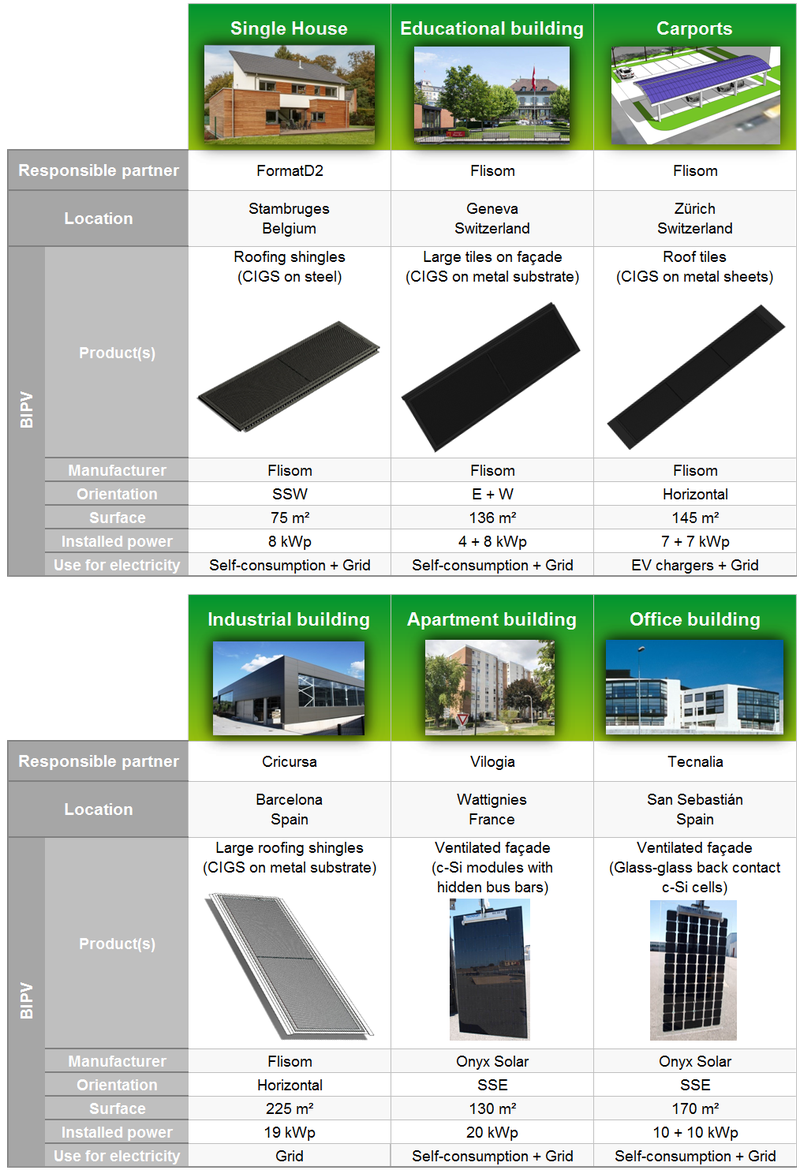 The following video, used in the traning workshops held in Novmeber 2019, also provides an overview of the installation carried out in the project demos:

The single house was built in 2015-2016 in accordance with passive and bioclimatic standards. It is already inhabited by the owner and monitored for various studies in terms of electric consumption, room temperature and relative humidity.

The implementation of the BIPV roof composed by CIGS on steel modules and manufactured by FLISOM was successful with excellent planning and execution of installation works. The careful architectural integration design in a new building formed a highly conducive site to accept BIPV solutions. The installed BIPV system is expected to make the house an energy-plus building, meaning its net yearly energy production will exceed its consumption.

The main historical building dates from the 18th century while the other pavilions are more recent additions. The BIPV system installed in the École Hôtelière de Genève consists of several ventilated façades built with CIGS modules laminated on metal piece, designed and manufactured by FLISOM. The BIPV modules have been specifically designed for the demonstration. The geometry of the metal pieces, used as substrate for the lamination of the PV layer, allows matching modules each other in order to easily construct a ventilated façade

Two carports were constructed in separate locations near Zurich: at the EMPA headquarters in Dübendorf, and in Seuzach. Sharing the same design, they were built around purpose-made curved metal tiles sporting CIGS thin-film PV, providing both functional and esthetic value.

Both carports include an Electric Vehicle charger, so that the produced electricity can be directly used on location. The carport design and installation were successful, maintaining the design style of the previous carport.

The roof of Cricursa’s industrial facility in Catalonia was retrofitted with 200 m² of thin-film CIGS shingles. The shingles were integrated in the roof structure in order to ensure a harmonious visual appearance.

The installation was executed in between June 2019 and July 2019. The efforts dedicated to the architectural integration design phase have brought good results on site, making the installation works proceed smoothly.

The final integration design was quite conditioned to the aesthetical criteria, related to the architectural design of the residential storey block retrofit in process; the effort dedicated to this aspect has provided not only a good functional result, but also a great aesthetic appearance.

The permitting process was long and difficult due to the public housing character of the demo-building.For this reason, parallel and subsequent tasks suffered important delays for this demo-site. Today, the demo-system is successfully installed and legalized. One of the main objectives for installing BIPV at this location was to significantly reduce the electricity bills for the building, which will benefit the tenants.

Two symmetrical ventilated BIPV façades were installed at the Tecnalia building in San Sebastián, in the Spanish Basque country. The four levels of the building mainly host offices but also laboratories and special machines used for research purposes in the basement. Installation works took place during March 2019.

The singular geometry of the existing façade has required specials efforts during the architectural integration design phase and the installation works. Despite the difficulties, final result was highly satisfactory.

More innovative BIPV technologies are being tested at the following experimental sites. For these products Technology Readiness Level 6 (TRL6) should be reached by the end of the project, at which point the next step will be demonstration in real building applications.

NEST is a large modular research and innovation building owned and operated by EMPA and Eawag in Switzerland. It is a functional test site where innovative technologies, materials and systems can be validated under realistic use conditions. 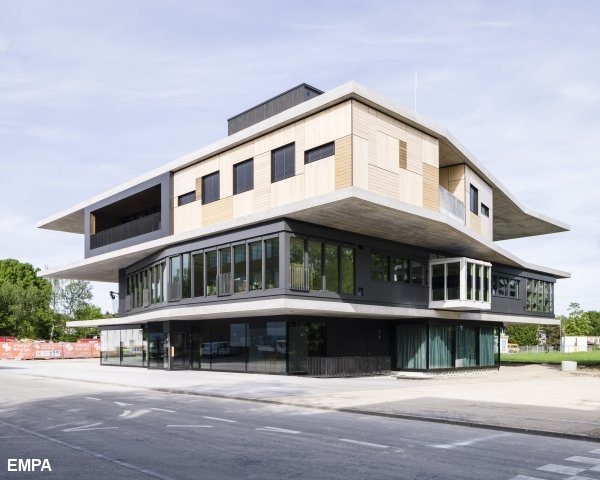 BIPV prototypes manufactured by Flisom will be validated at NEST during the course of the project. Details will be communicated when available.

FACT is a new testing facility at the INCAS test platform of the CEA INES (French National Institute for Solar Energy). The acronym “FACT” stands for “FACade Tool”. Operational since summer 2016, it provides a modular tool to evaluate the energy performance and impact of building envelopes on indoor environment quality. FACT allows to test with maximum flexibility:

The ongoing tests conducted for PVSITES will demonstrate the technical feasibility and validate the performance of several BIPV solutions:

The products and solutions have been developed by Flisom, Onyx Solar and Tecnalia with the collaboration of other partners such as Film Optics.

The following parameters are being measured and optimized:

Testbox is one of the facilities operated by Acciona at the CESE3R test center. With an area of 6000m², CESE3R is dedicated to the applied validation of energy efficiency and renewable energy technologies in buildings and industry.

Testbox is comprised of two identical containers into which a glass facade sporting PV cells is integrated. Both containers are monitored in terms of indoor comfort (temperature, humidity).

A c-Si semitransparent low-concentration BIPV system developed by Tecnalia in collaboration with Onyx Solar and Film Optics has been implemented in a façade configuration on one of the two containers, in combination with the existing PV cells. 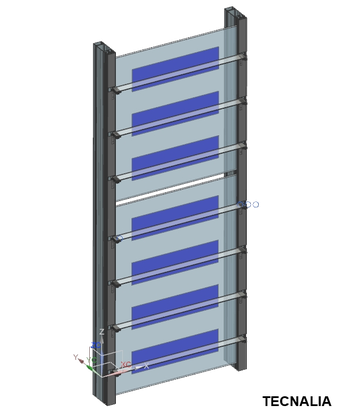 The impact of the installation on electricity production and indoor comfort will be directly compared to reference conditions in the second container.